Frenemy is a social network site that warps around in its persona, that befriends Thrasher and Blastus. He is voiced by Jack McBrayer.

Frenemy is a giant purple floating emoticon. Like most of the robots on Insanus, he's covered in spikes. He wears what appears to be blush, eyeliner, and lipstick. The pink highlights on his body tend to change shade when he displays certain emotions. Of course being an emoticon, he also uses visual gags you'd typically see on social media such as x's for eyes, or over-exaggerated devil horns for added effect.

Frenemy comes off as jovial and friendly, but in reality is vindictive and outright homicidal when provoked. Thunderbite described Fenemy as having "baggage and horrible self esteem issues," and Thrasher shared the same views, calling him "Needy, controlling, and insane." Once Frenemy became Thrasher and Blastus' friend, in the beginning they enjoyed his company and the newfound popularity he came with; it was only after Frenemy started showing signs of stalker behavior when they sought out Squeeker as his replacement. Once Frenemy realized when he was about to be replaced by Squeeker, he murdered her thinking Thrasher and Blastus were 'seduced' by her, and proceeded to humiliate the two with the personal information he had obtained on them out of spite. Being confronted, Frenemy was perfectly content killing Thrasher and Blastus, keeping them all for himself claiming "Death will not separate us!" 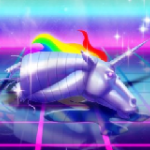 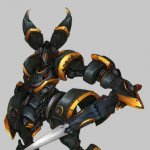